“Paying Rent” is a symbolic recognition of the unjust dispossession of Indigenous peoples from their land, and a reflection of our desire for a more equitable sharing with First Nations in the future.

Help us to open our hearts to others, pay attention to our thoughts, words and actions, notice when we have hurt others and change our behaviour in the future. With this Heart Garden we honour the children who were lost or survived the Indian Residential System.

On September 23rd 2018, Traditional Healer James Carpenter from Anishnawbe Health Toronto (AHT) conducted a Naming Ceremony to identify the spirit underlying an endowment fund established in support of the new home for Anishnawbe Health Center being built near the Distillery District

The Indigenous Rights Solidarity Group (IRSG) meets at 7:30 on the 3rd Wednesday of every month from September to June, at Trinity-St. Paul’s. Below is a sampling of some of some of our past and ongoing activities:

“Paying Rent” is a symbolic recognition of the unjust dispossession of Indigenous peoples from their land, and a reflection of our desire for a more equitable sharing with First Nations in the future.

“Paying Rent” collections are a biannual event in our church life, and are part of special services: the June service takes place during national Aboriginal celebrations, and the November service during Treaty Recognition Week in Ontario.

The collection is a way to build relationship through a concrete act of repentance, and is split between the Native Men's Residence and the Native Women's Resource Centre:
Through a culture-based approach that addresses the holistic needs of its clients, Na-Me-Res' (Native Men's Residence) mission is to provide temporary, transitional and permanent housing to Aboriginal men experiencing homelessness in Toronto while providing outreach and support services to the broader Aboriginal homeless population.
During our first meeting with Na-Me-Res staff, we had a conversation about the history of settlers taking the land, residential schools, and continued racism and inequality. We learned that two of Na-Me-Res’ programmes target individuals suffering from mental health and addictions that can be directly attributed to the continuing social problems stemming from this history. Mino Kaajigoowin (finding something good - finding the good to find self or direction in life) and Ngim Kowa Njichaag (reclaiming the Spirit) address mental health and addiction issues, cultural loss and healing through traditional culture.
Through this relationship we were also introduced to elder Jacqui Lavalley who has helped us with our Heart Garden, and have been invited to volunteer at thewir annual Pow Wow at Fort York.
The Native Women’s Resource Centre of Toronto provides a safe and welcoming environment for all Aboriginal women and their children in the Greater Toronto Area. Programs fall under six broad categories: Housing, Families, Advocacy, Employment, Education, and Youth. A variety of Cultural Activities are offered for clients and the general public, including the annual Minaake Awards, Sisters In Spirit Vigil, and Winter Solstice.

At our first meeting, we had a tour of the building. What impressed us was that people who were formerly clients had become centre leaders. As we watched the children of clients play and learn, we heard from social workers who support homeless women in their dealings with Family Services. The work readiness programs are fully subscribed. We left convinced that a very busy Indigenous staff were healing many, many women to the benefit of subsequent generations. 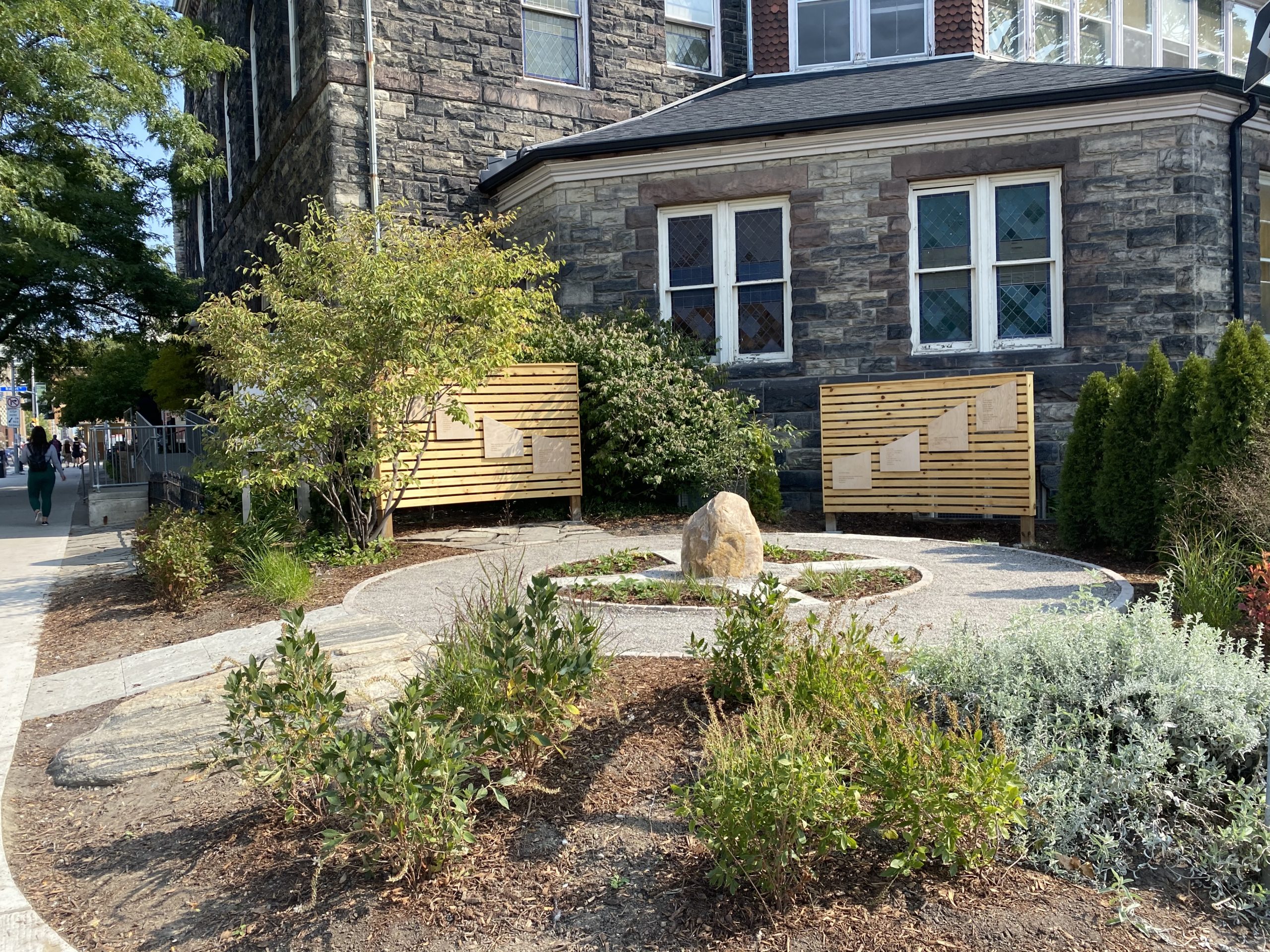 “The establishment and operation of residential schools were a central element of [Canada’s Aboriginal] policy, which can best be described as ‘cultural genocide’…Canada separated children from their parents…not to educate them, but primarily to break their link to their culture and identity.” excerpt from the Truth and Reconciliation Commission (TRC) Report

In 1986 the United Church of Canada apologized to Indigenous peoples for our part in the history of colonization: “We tried to make you like us and in so doing we helped destroy the vision that made you what you were. As a result, you and we are poorer and the image of the Creator in us is twisted, blurred and we are not what we are meant by God to be.” In 1998 the United Church apologized for the pain and suffering that our church’s involvement in the Indian Residential School System caused.

The call to create Heart Gardens came from the First Nations Child and Family Caring Society as the TRC came to a close in 2015. “Honouring Memories, Planting Dreams” invites individuals and organizations to join in reconciliation by planting Heart Gardens in their communities.

Our Heart Garden is situated next to Trinity-St. Paul's United Church, which was completed in 1889. The building is an expression of the prestige and confidence of this Christian community in the same era in which government and church were confidently embarking on a project to end the Indigenous way of life. Christian churches played a central role in denigrating this spiritual way of being; now, with an attitude of humility, we seek to learn from it as a source of healing from our own captivity to colonialism.

“Help us to open our hearts to others, pay attention to our thoughts, words and actions, notice when we have hurt others and change our behaviour in the future. With this Heart Garden we honour the children who were lost or survived the Indian Residential School System.”

The garden is in the form of a medicine wheel. Over the years we have been working with Jacqui Lavalley, an Anishinaabe elder, to guide us in planting the four sacred medicines – tobacco, sage, cedar and sweet grass.  Jacqui also leads us in Anishinaabe ceremony and teachings.

In the summer of 2019, several large boulders were unearthed during the construction of the parkette across the street from the garden – a story of the earth in this place. The city gifted us with two of them. In Indigenous culture, stones are regarded as Grandfathers, wise from their countless lifetimes; the earth remembers suffering. About the same time we found a poem by Métis author Katherena Vermette. She writes of “an other story …carved on earth, every stone a song, that echoes the erosion…another story…scrolled on wind, painted in blood, every bone sings…” Over the summer of 2020 Anishinaabe artist Solomon King did the stonework and built the wooden screens that hold the poem. In the fall of 2020 the garden was completed.

“We are here to honour our ancestors and make a place for our children.  It is the only job that matters.” Katherena Vermette

We acknowledge the generous financial support of Trinity-St Paul’s United Church, the United Church of Canada Foundation, Bloor Street United Church and individual donors which contributed to the realization of this project.

““My mind empties, my heart opens, my spirit soars.”

"As a young boy, huddled over a hot bowl of soup on the upper balcony and protected from the cold, I asked my father why we came to Trinity St. Paul's. He answered...because we are safe here. We are in the House of God. I ask him 'who is God' and he replied 'everything'" (James Carpenter, AHT Traditional Healer)

On September 23rd, Traditional Healer James Carpenter from Anishnawbe Health Toronto (AHT), the Indigenous Community Health Centre, conducted a Naming Ceremony to identify the spirit underlying an endowment fund established in support of the new home for Anishnawbe Health Center being built near the Distillery District. James identified the spirit name after conducting a sweat lodge with nine TSP members and then dreaming with the tobacco offered by the members at the lodge. Following a pipe ceremony and announcement of the Spirit Name, over 200 TSPers and guests celebrated with a round dance and generous potluck feast that included bannock made by our youth and children with members of the Indigenous community. The Kind Spirit of Trinity St. Paul's vibrated throughout the sanctuary, dining hall and into the streets with food being carried away to feed people who could not attend.

Direct contributions to the Anishnawbe Health Foundation may be made at www.supportanishnawbe.ca. Named recognition opportunities on the Centre’s donor wall and in the centre are available for pledges of $5,000 or more. For more information, contact jcookson@aht.ca

For more information on The United Church of Canada’s Healing Fund which will also benefit from grants made by Mii-gi-we-Zha-way-nim-Manitoo please visit https://www.united-church.ca/stories/healing-fund-changing-lives