This three-week series will be based on a short video interview with Chris Hedges, author of the book, “Wages of Rebellion: The Moral Imperative to Revolt.” Chris Hedges is an American Pulitzer Prize winning author, journalist, anti-capitalist, and Presbyterian minister. His book analyzes revolutions from the 17th century onwards and how they have impacted societies. He argues that the United States is ripe for a revolution and, he states, this is for the best.

Participants are asked to preview the video on YouTube entitled, “Chris Hedges on What it Takes to be a Rebel in Modern Times.” The video is 16:35. It will be assumed that participants have viewed the video before the Lenten series.

All three sessions will focus on quotes from Chris Hedges and Scriptural passages. There will be open flow discussion or breakout groups depending on the number of participants. Participants may take part in any number of sessions.

This series is being planned and facilitated by Joanne Clarke and Joshua Fernandes. For more information, please contact Joanne Clarke at joanne.josito@gmail.com

Emmanuel College’s Centre for Religion and Its Contexts, Trinity St. Paul’s United Church, the Centre for Philosophy, Religion and Social Ethics of The Institute for Christian Studies and the Toronto Mennonite Theological Centre are hosting the second Christian Left Conference (free and online) July 23-24, 2021. The theme is “Rethinking the Christian Left from the Belly of Empire: Charting New Paths Beyond Colonization.” Proposals are due March 19, 2021 and can be submitted online here: https://bit.ly/cfpchristianleft2021. Conference FocusWhat does it mean to speak of a Christian Left? Who is included under the label the Christian Left? In the last decades, the Christian left has been undergoing enormous reconfiguration: new actors, issues and concerns have uncovered the colonial underbelly of the Christian Left. From the Suffrage movements through to the Social Gospel, and continuing through liberation theologies and political theologies to today, these reconfigurations have included an emergence of different approaches to reading the Bible, the articulation of alternative approaches to theology and ethics, and the crossing of disciplinary boundaries. These various actors have complexified idealized notions of the Christian left in Canada and across the globe, and invite us to critique and dismantle its colonizing features. Call for Papers The Christian Left Conference invites proposals that intentionally reflect on the emergence of historical “new” actors and voices in the Christian Left. Proposals can be related to (re)tracing the historical, theological and biblical-hermeneutical developments of the Christian Left and its present disciplinary reorientation. Topics related to the interconnection between social movements and actors, the disciplinary cross-fertilization on the areas of interreligious collaboration, the dismantling of traditional canons of theology and biblical hermeneutics, and the reconceptualization of the human experience are especially welcome. This conference is interdisciplinary and welcomes papers from many fields, primarily theological studies, biblical interpretation, preaching and worship, congregational and community ministry, history, ethics and political theology, as well as religious studies, sociology, anthropology, literary studies, philosophy and the humanities broadly understood. Papers engaging with Canadian contexts are particularly encouraged; we also welcome papers from across the world.Proposals are due March 19, 2021 and can be submitted online here: https://bit.ly/cfpchristianleft2021. Watch this video of last year’s keynote lecture featuring Joerg Rieger for a sneak preview of what’s to come this year! https://www.youtube.com/watch?v=TIcTxxKgb48…Trinity-St Paul’s United Church and Centre for Faith, Justice and the ArtsInstitute for Christian StudiesToronto Mennonite Theological CentreEdge: A Network for Ministry DevelopmentThe United Church of CanadaToronto School of TheologyLikeCommentShare 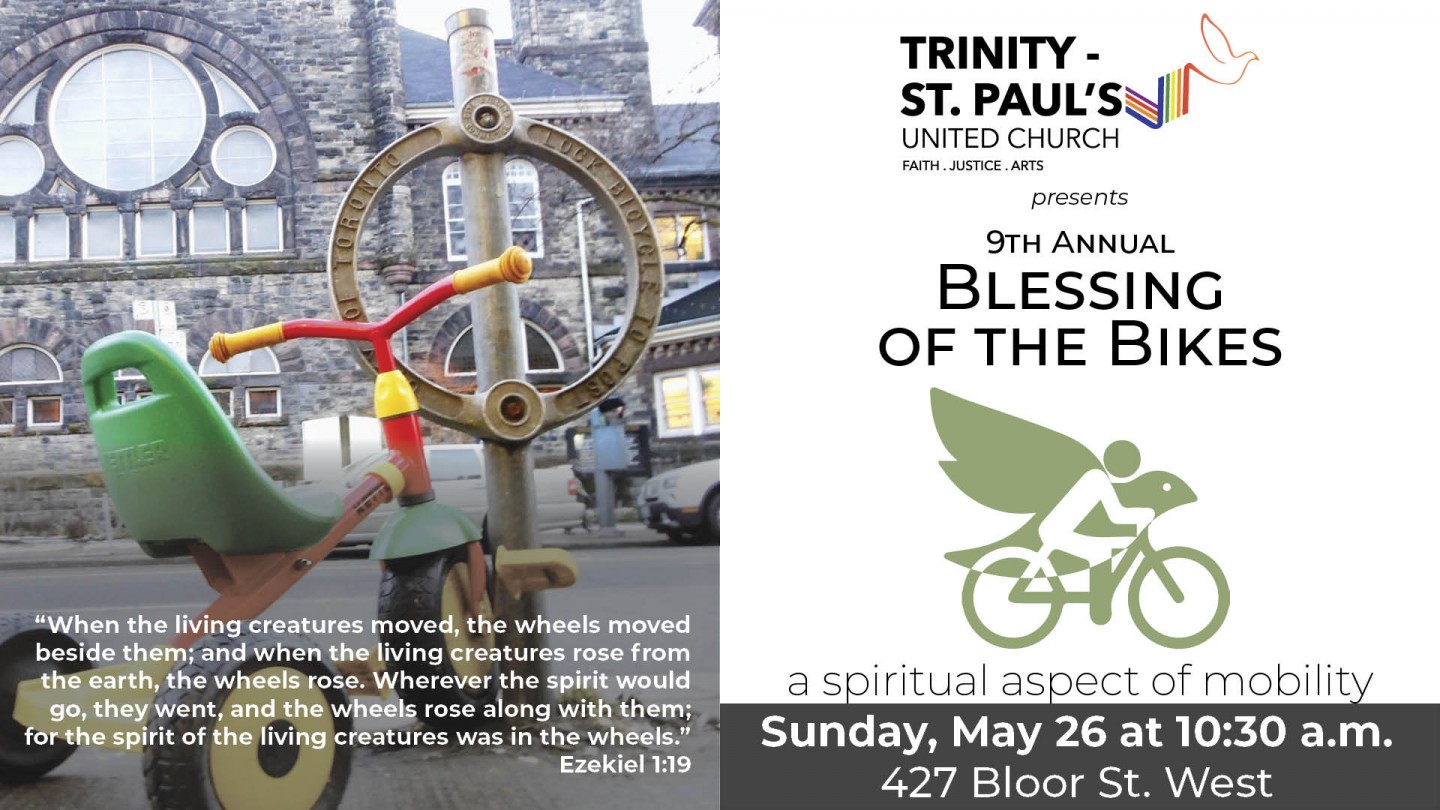 Blessing of the Bicycles

9th Annual Blessing of the Bicycles and Mobility Assists
Bike to church this Sunday to have your wheels blessed!

Celebrating human-powered transportation, bike blessings are a spiritual aspect of bike safety. We will be blessing mobility assists during the service, and bicycles in the back garden directly after service. 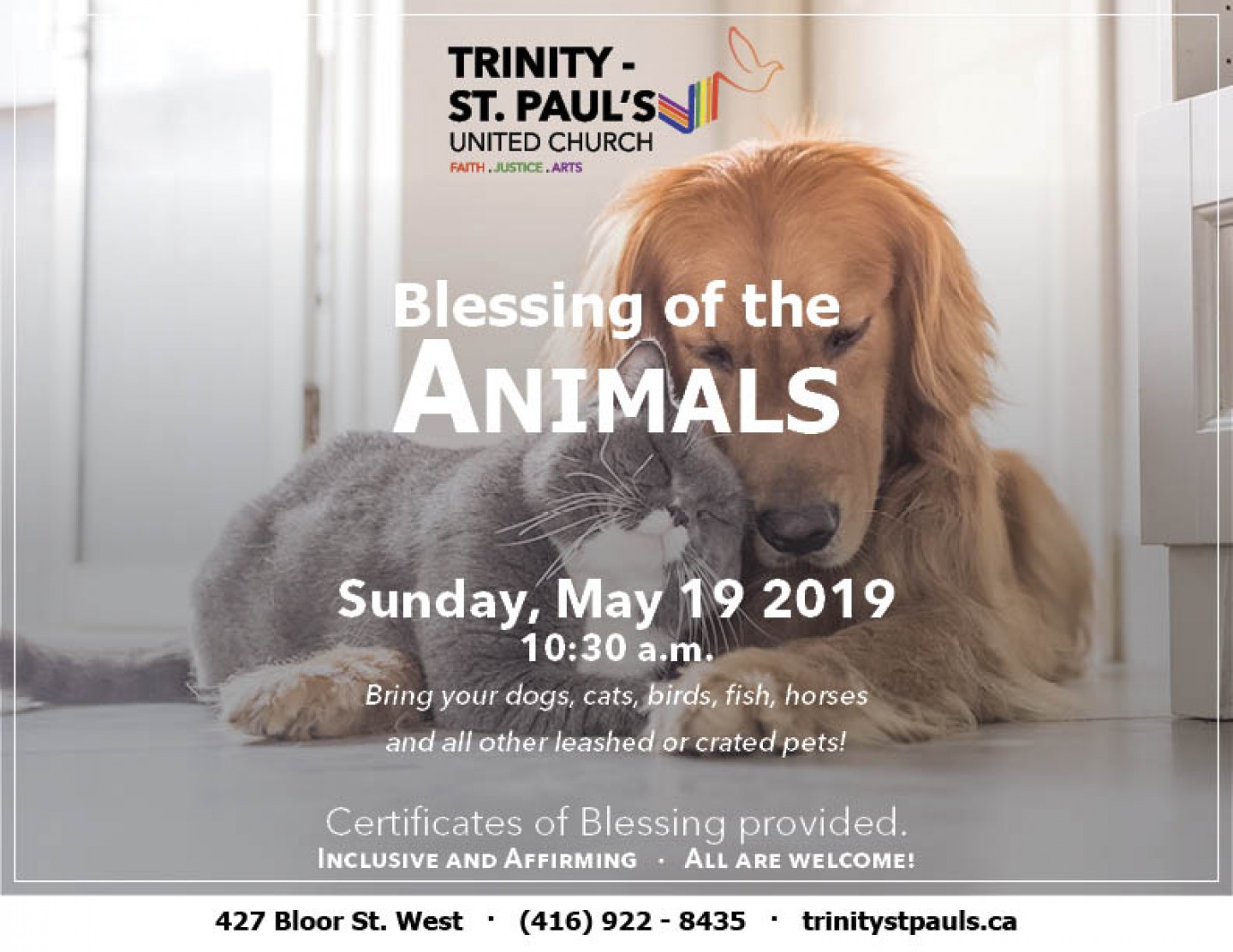 Sunday: Blessing of the Animals

#BlessingoftheAnimals this Sunday, May 19! Bring your dogs, cats, all other leashed or crated pets welcome! Or bring a picture of your pet who has passed – or who is too unruly to leave the house!

Certificate of blessings provided. See you and Fido this Sunday!!
#animalblessing #saintfrancis